The eco-village aims to broadcast the ideas and principles of local democracy and cooperative organization.
The decision-making structure of the eco-village is horizontal and decentralized. Most initiatives and decisions are made in groups of houses or working groups. The Executive Board, composed of one representative per settlement, with a President elected from among the eight representatives, has only a coordinating role. Decisions concerning the eco-village as a whole are taken at the monthly assembly at which all inhabitants are invited to participate. Most decisions are made on the basis of consensus.
An ambitious project like the ecovillage of Hjortshøj is the result of strong commitment and cooperation between a lot of people.

Obviously, if some are very engaged in the running of the eco village, others much less. However, they have all made the choice to give meaning to their lives, and to experiment other ways such as green building, a community shared garden, local cultural life, commun meals, etc.

"The organization here is very horizontal, Pierre (an inhabitant) explained. There is no concentration of power for which it is worth fighting. Thus, the relations are appeased. Even conflicts create links."
"Whoever brings an idea to one of the group meetings or during the General Assembly of the cooperative will always find someone to accompany him and bring the project to life," Anke, another member of the ecovillage, said.

In addition, no one is required to participate in the activities. Except for some "mandatory" tasks such as cleaning the common room, all participation is voluntary and the level of commitment is individual.

"There is a lot of respect for volunteering,"  Anke said, "so people are not afraid to commit and then withdraw when their priorities change."

The initiative has the power ! 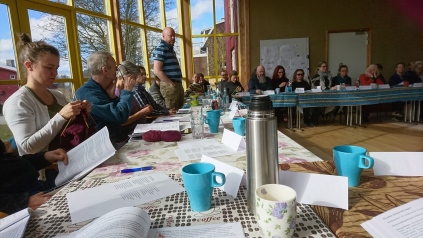